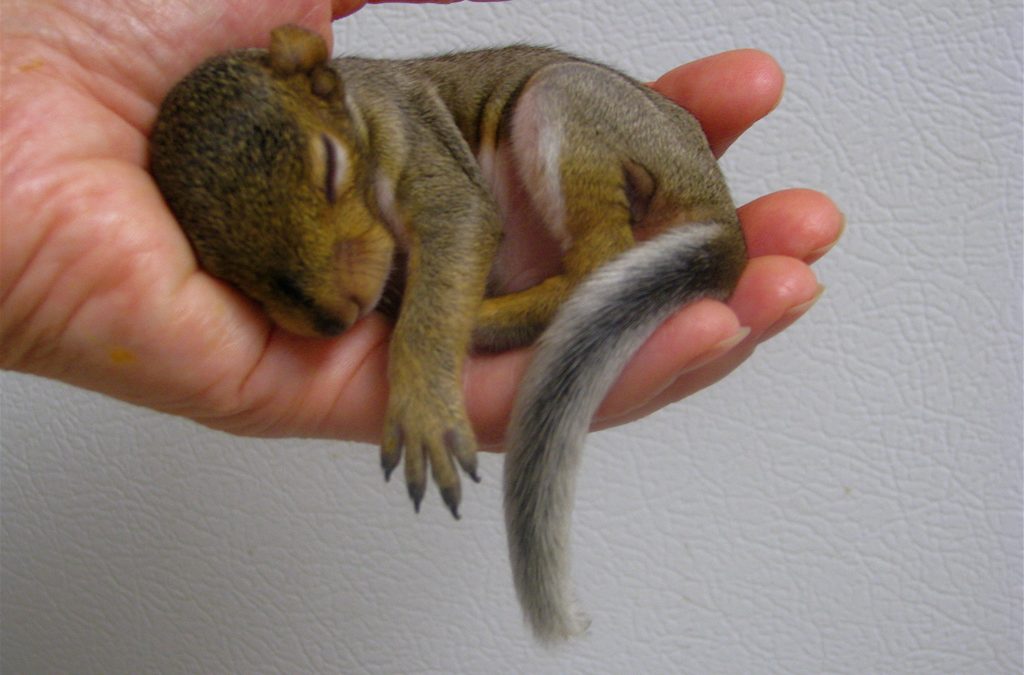 Bloat, diarrhea, emaciation, dehydration, weight loss and hypothermia are sadly just a few of the things that can happen to native wildlife after being fed the wrong diet by humans.

The WHS Wildlife Rehabilitation Center cares for countless orphaned wildlife of all species that have been fed by well–meaning members of the public. This may seem like the right thing to do, after all these are babies that no longer have a mom and need nutrients right away – or so “the internet says.”  In reality, orphan wildlife requires such specialized care, and more often than not, feeding is the last thing that licensed wildlife rehabilitators will do when receiving an animal in need.

If an animal is truly orphaned, it is generally suffering from dehydration, emaciation/starvation and hypothermia. Feeding an orphan who is showing these signs can cause further damage as they are using all of their energy reserves to stay alive, let alone digest food.

This goes for adult wildlife as well.  They simply cannot process whole food when suffering from conditions such as emaciation. When an animal has gone without food and water for long periods of time and they are fed commercially bought formulas/food,  or worse yet, human food, they go through what is called re-feeding syndrome. The body spends so much energy trying to break down nutrients and digest what is given when it should be focusing on staying warm and alert. The worst thing that humans can do for an animal in this state is provide an incorrect diet.

Wildlife rehabilitation exists so that these animals can have a second chance at living in their native wild habitat.

Licensed wildlife rehabilitators are trained to be able to diagnose common symptoms that go along with animals becoming orphan or starved. Treatment often includes a stabilization process of heat and fluids before any feedings are done, and sometimes this process takes days. Wildlife rehabilitators are also able to order or make formulas and feeding supplements that are designed for each specific species of animal. For example, feeding an orphaned cottontail rabbit kitten formula is one of the worst things we can do. The formula is not designed for these small mammals and will cause bloat, diarrhea, weight loss and ultimately can lead to the death of the animal. Wildlife benefit from being fed a diet that is formulated for their specific needs and gastro-intestinal functions.

Every year, the WHS Wildlife Rehabilitation Center encounters well-meaning citizens who bring the center orphaned wildlife that they have been feeding for several days.

The reason that these animals finally make it to our facility is because they have become lethargic. By the time that we are able to start treatment, they are often too far gone and have sustained severe injury to their organs and are not able to pull through. They are emaciated, dehydrated and lifeless. This is most often avoidable if the animal is brought to the WHS wildlife center for care right away. Sadly, many residents explain to our center staff that they just wanted the experience of caring for a wild animal, they wanted to domesticate the animal and make it a pet, or they love wild animals so much that they just wanted to do something to help.

This past year our center received a juvenile red–tailed hawk who was found by a citizen who fed the bird chicken breast and coca cola for several days. By the time the hawk was brought to the wildlife center, he had suffered severe crop stasis  – a very painful condition with a poor outcome. He was so dehydrated and emaciated, that even with heroic efforts on behalf of our wildlife center staff, the beautiful bird died a painful death.

The WHS Wildlife Rehabilitation Center center receives many calls from citizens who have found animals and insist on keeping them in their home because “they know what works.”  It is important to recognize that in Washington State, it is illegal to keep native wildlife.  Orphaned and injured native wildlife must be transferred to a licensed wildlife rehabilitation center.

The same problems associated with feeding orphaned baby wildlife also apply to adult animals. One of the most common issues the WHS wildlife center treats is the case of angel wing – a severe deformation of flight feathers in birds when they are fed bread. Emaciation and bloat are commonly found when deer are fed commercial grains or bread. Hair loss, juvenile cataracts, delayed development when raccoons are fed nothing but bird seed.

One of the biggest issues that occurs in Whatcom County in regards to inappropriate human interaction/feeding of wildlife is the feeding of deer.

Deer do very well on their own – without any human interaction, especially food. Most of the food that the public can purchase for deer is commercial and not easily digestible for a wild animal. Deer are ruminants and have very special needs and digestion.  Foods like grains, breads and bird seed are inadequate for the long term health of deer. When food like this is provided to deer, they will eat it as it is an easy and tasty meal (like donuts to humans) but they will not get the nutrients that they need. Then they become thin, dehydrated, have diarrhea and can bloat.

When deer get so used to easy food sources that they can become habituated and lose their fear of humans. This poses such a threat to humans, domestic animals and deer, especially as rut season approaches.  A deer that is not afraid of people is a deer that is not truly “wild”.  The WHS wildlife rehabilitation center sees a spike in malnutrition cases of deer in winter months when commercial feeds are at their highest distribution by the public. Deer are equipped to be able to find food sources like lichen and bark during cold weather and are able to digest these types of food.  This food is what their bodies expect, not grains and fruits. Deer who consume large quantities of commercial foods in the winter are at risk of literally starving, as they are not able to process the food and become weak.

In the summer, deer are designed to eat all of the browse and new foliage that grows in abundance in the community. If they are nursing fawns, they are eating a rich diet to provide enough milk.

Feeding deer and creating a “bond” with the animal can not only harm the animal from a nutritional standpoint, but also endangers the animals as they lose their fear of people.

The majority of deer received by the WHS wildlife rehabilitation center that are the victims of car accidents are deer that are in fact, too used to humans and have lost their ability to sense danger.  Many deer that attack dogs or other domestic animals due so because they have become habituated to their surroundings and lost their fear of humans.  It is a vicious cycle and one that is truly harmful for this species. So in a nutshell . . .  please do not feed the deer!

For more information about helping native wildlife in our community, go to our Wildlife Page.